The structure and function of biotechnologically relevant enzymes

Antibiotic mode of action and mechanisms of resistance

Determination of the structure and mechanism of action of natural biologically active compounds, understanding of their role in the environment as well as their interactions with target molecules

Characterization of the biosynthetic, biotransformational and biodegradational potential of bacteria, fungi and invertebrates, including the properties and structure of their enzymes

Study of the metabolic activity of microbial producers of natural substances in the environment using metagenomics, metatranscriptomics and metaproteomics.

The composition and ecology of communities of natural compound-producing microorganisms in the environment are studied with the use of metagenomics metatranscriptomics and metaproteomics. Functional screening and characterization leads to the recovery of microbial strains with biotechnological potential, their characterization using genome sequencing and proteomics and the exploration of the regulation of the production of natural, biologically-active compounds, proteins and genes. Novel free-living bacteria and fungi as well as those living in symbiotic relationships with other organisms (plants, insects, mammals) are targeted.

Testing the clinical potential of new antibacterial compounds. Exchange of research fellowships is welcome. Student positions at all levels are advertised. Cooperation with end-users of the biotechnologically-relevant environmental strains of microorganisms, their enzymes and genes. 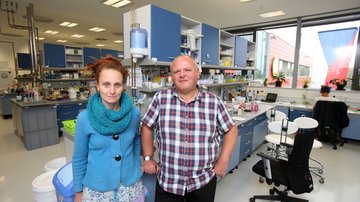 BIOCEV in media: Antibiotics do not work. Will the Czech discovery help?