Experts from the First Faculty of Medicine of Charles University and the Biotechnology and Biomedical Centre of the Academy of Sciences and Charles University (BIOCEV) have teamed up with the Czech company GlobeTech Innovation s.r.o. and combined science with cosmetics. Based on their joint efforts, a unique line of innovative cosmeceutical products under the brand name SAIN® was created, which builds on the patented use of the bioactive molecule of alaptide.

SAIN® is a breakthrough cosmeceutical line of creams that affects the physiological and regenerative processes of the skin. Cosmeceutics combines scientifically proven components that are used in accordance with the requirements of the cosmetics industry. The main component of these new products is the molecule alaptide, which was patented in the 1980s when scientists Ing. Evžen Kasafírek, CSc. and RNDr. Václav Plaisner from the Research Institute for Pharmacy and Biochemistry in Prague discovered this bioactive molecule that has extraordinary effects supporting the natural processes of skin renewal and healing. However, a practical application of this discovery did not come until after almost thirty years, when another two scientists from the First Faculty of Medicine of Charles University and the BIOCEV centre began researching the alaptide molecule again. It was Prof. RNDr. Vladimír Král, DSc. and Prof. MUDr. Pavel Martásek, DrSc. Their cooperation with the Czech company GlobeTech Innovation s.r.o. resulted this year in introduction of a number of innovative cosmeceutical products under the brand name SAIN®. This represents a whole new way of successful cooperation of Czech scientists from Charles University with Czech companies. 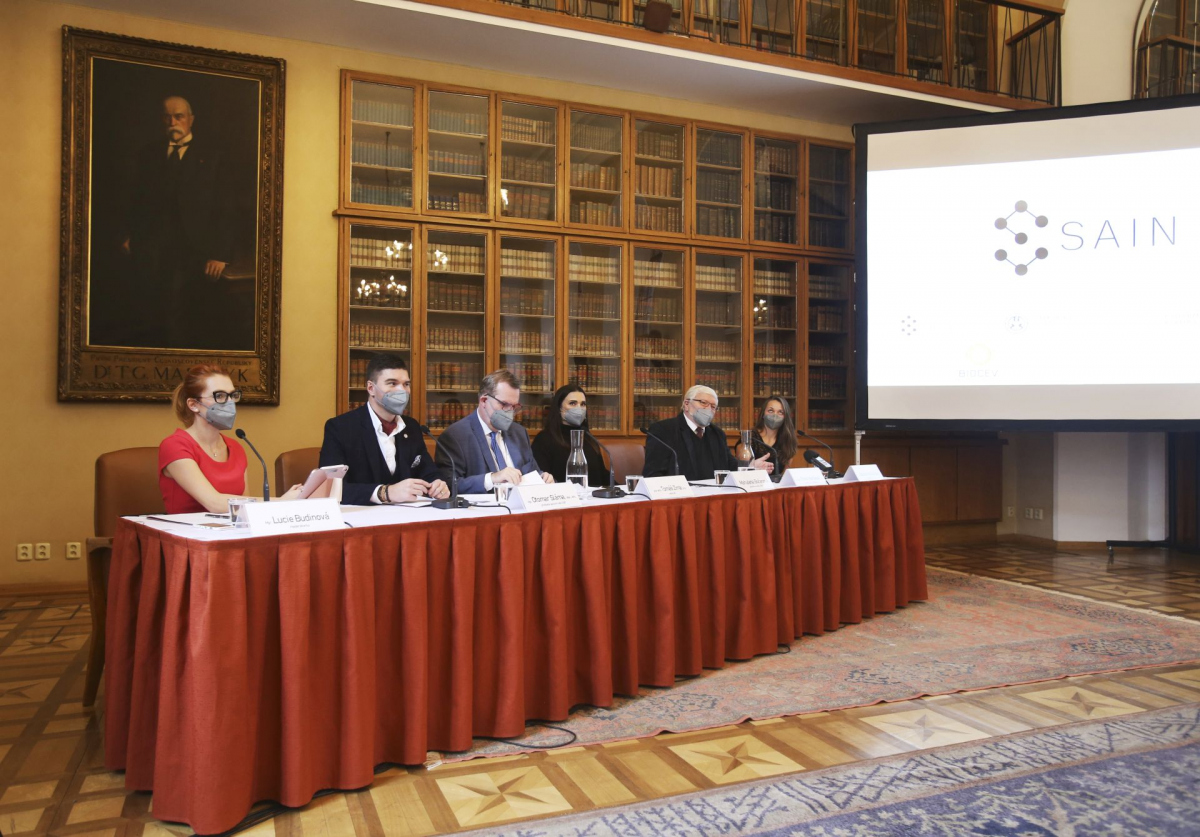 "Thanks not only to the unique research conducted by the professors, but also to the mutual trust, openness and work of the entire team, including colleagues from CUIP, we are today witnessing the birth of exceptional Czech SAIN products," says Barbora Vodičková, executive manager and co-owner of GlobeTech Innovation s.r.o.

The formula of SAIN® products is based on an innovative way of using a bioactive molecule of a dipeptide called alaptide. Shortly after its discovery in the 1980s, a number of scientific studies were conducted, including preclinical ones, in which the effects of alaptide and the possibilities of its use were investigated. Alaptide was found to be highly stimulative for the growth of healthy cells and have a remarkable regenerative effect wherever it is applied to damaged cells, including topical application to skin damaged by external influences. It is thus used in topically healing peptide mixtures with regenerative effects, as well as in aesthetic medicine, cosmetics and wound healing. Scientists have also studied its effects in the healing of chronic, inflamed and complicated wounds, as well as common injuries, postoperative wounds and burns. In cosmetics, alaptide has a targeted beneficial effect on the processes taking place in the skin. Creams containing alaptide therefore show excellent effects in reducing the signs of ageing and rejuvenating the skin.

Among other things, the inventors have shown during testing that the mixture of peptide components also effectively reduces pigment spots or birthmarks and prevents the formation of scars after cosmetic procedures.

"Thanks to the significantly improved synthesis and discovery of the solubility of alaptide in a fat base, i.e. the possibility to apply alaptide in the form of an ointment, a cream or a gel, we found a new way to use alaptide in innovative cosmetics and comprehensive skin care," says Prof. Martásek, scientific director of the BIOCEV centre. 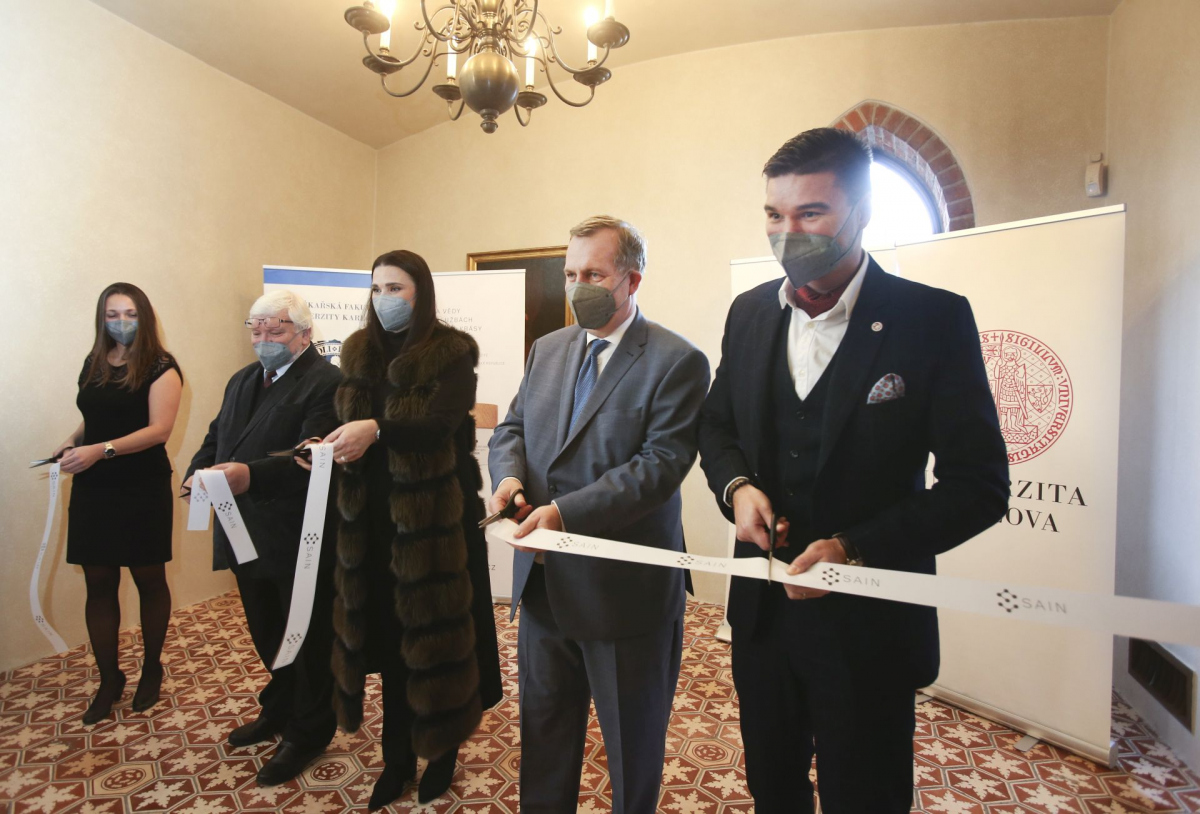 However, alaptide has much greater features and the team is continuing to investigate its practical usage. As the patent states: "The mixture of topically healing peptide components with alaptide is used especially in the healing of chronic, inflamed and complicated wounds, but also common injuries, postoperative wounds and burns. For healthy patients, it shortens the healing time by almost a third. In cases of hard-to-heal wounds, it is by up to 7 times. In combination with other peptide components, alaptide has huge potential to become an effective assistant for doctors, and especially for their patients, in combating various forms of skin damage. These include aesthetic medicine, support for wound care and healing after surgery and microsurgery, in common injuries, including poorly healing, inflamed or diabetic wounds where sepsis or infection can be a significant barrier to healing." adds Prof. Martásek, who is looking forward to the next steps.

"Invented at Charles University, made in the Czech Republic, dedicated to the future." This is the main motto of the SAIN® brand. Emphasis is therefore placed on the products being manufactured in the Czech Republic in cooperation with local companies, Charles University and the BIOCEV biomedical centre. At the same time, sustainability and environmental friendliness are paramount - from the point of development into the hands of satisfied end users.

In the spirit of Czech tradition and craftsmanship, SAIN® creams are presented in unique porcelain cups made by Thun 1794 a.s. They meet all requirements for safety and hygiene while at the same time bringing a new dimension of aesthetics and the tradition of Czech handicrafts to everyday skin care. The cup closures are made of oak from the forests of Hradec Králové, which were worked by design carpenter Roman Buršíček.

"For us, SAIN is a textbook example of a successful technology transfer. Charles University completed basic research with revolutionary knowledge about the effectiveness of alaptide in combination with other substances, and through CUIP they were able to identify the right partner, who not only found a suitable use of the substance in the cosmeceutical industry, but also managed to breathe life into the product and market it. This makes the product readily available to each of us, literally "to save our own skin”, says Otomar Sláma, chairman of the board of directors of CUIP a.s.