Researchers Tomáš Zikmund and Tomáš Stopka have demonstrated that the successful development of white blood cells in the thymus gland can prevent autoimmune disorders. Research carried out with transgenic mice has revealed that the maturation of the immune system is directly dependent on how the genetic code of nuclear DNA is “stored”. Any disruption of this function in experimental animals resulted in severe immunodeficiency, including acute colitis. The results of their work were published in The Journal of Immunology on 8 May 2019.

The immune system is an organism’s key system that recognizes what is intrinsic to an organism and what is foreign, and with the help of specialized cells, it protects the body against pathogenic microorganisms. The situation where the immune system is not capable of protecting the organism is referred to as immunodeficiency (higher susceptibility to infections). In the opposite case, the immune system is hypersensitive and reacts even to its own tissues. This is referred to as autoimmunity (the organism is attacked by its own immune system) or an autoimmune disease. Autoimmune diseases also include inflammatory bowel diseases such as colitis, which affects 45 patients out of 100,000 people in the Czech Republic. The cause of this disease is not known, but there are several hypotheses; one of them assumes improperly functioning immune cells produced in the thymus gland, T lymphocytes.

The majority of immune cell functions is coded in a genetic sequence of DNA molecules. “For a DNA molecule, which is up to 2 metres long in every cell of the human body, to fit in the cell nucleus, it must be “wound” to specific proteins that enable its thickening. We can visualize this as a thread wound around a coil, which means that a lot of information is completely hidden. However, this thickening causes difficulties when reading the genetic information, which means that in the past, the enzymes that enable researchers to effectively decode a four-letter DNA code by molecular reading tools in the cell nuclei must have developed in primitive microorganisms. The tools also include remodelling enzymes such as protein Smarca5, which we researched,” adds Tomáš Stopka. “If we had not focused on researching how the genetic code is read in lymphoid cells, we would have never recognized that colitis can develop in mice with disturbed T lymphocyte maturation. This confirms our initial hypothesis that a number of complex diseases are caused by the information that a cell reads,” says Tomáš Zikmund, one of the authors of the prestigious publication.

A unique and rather essential property of the immune system is its ability to learn to identify molecules that come from both its own and foreign tissues. This ability is based on the production of diverse lymphocytes (white blood cells), of which each can identify only some. A healthy immune system is able to tolerate its own tissues, whereas if a lymphocyte identifies a foreign structure that is not part of the organism, it will activate an inflammatory reaction, the production of antibodies and the elimination of this structure and its source, such as a microorganism, away from the body. Just like other blood elements, the development of lymphocytes starts with a blood stem cell. Professor Stopka’ s laboratory has been engaged in the long-term research of haematopoiesis – both the normal development of blood elements and cancers that are caused by irreversible changes during the very early development of immature blood cells.

Thanks to sophisticated methods of DNA code analysis, we can research even the smallest changes down to an unprecedented level of detail. Tomáš Stopka says: “The genetic code is so complex that its content cannot be constantly read in every cell and therefore, there must be a system that gives priority to information for each cell and tissue. It is similar in a living organism and through the proteins that we are studying in our laboratory, we are able to read only the important information, while the majority of the code remains unread. Therefore, in immune cells, only those parts of the genome are read that are related to immunity. Thanks to the spatial orientation of the genome, this information does not have to be coded sequentially, but can be even found in different chromosomes.” 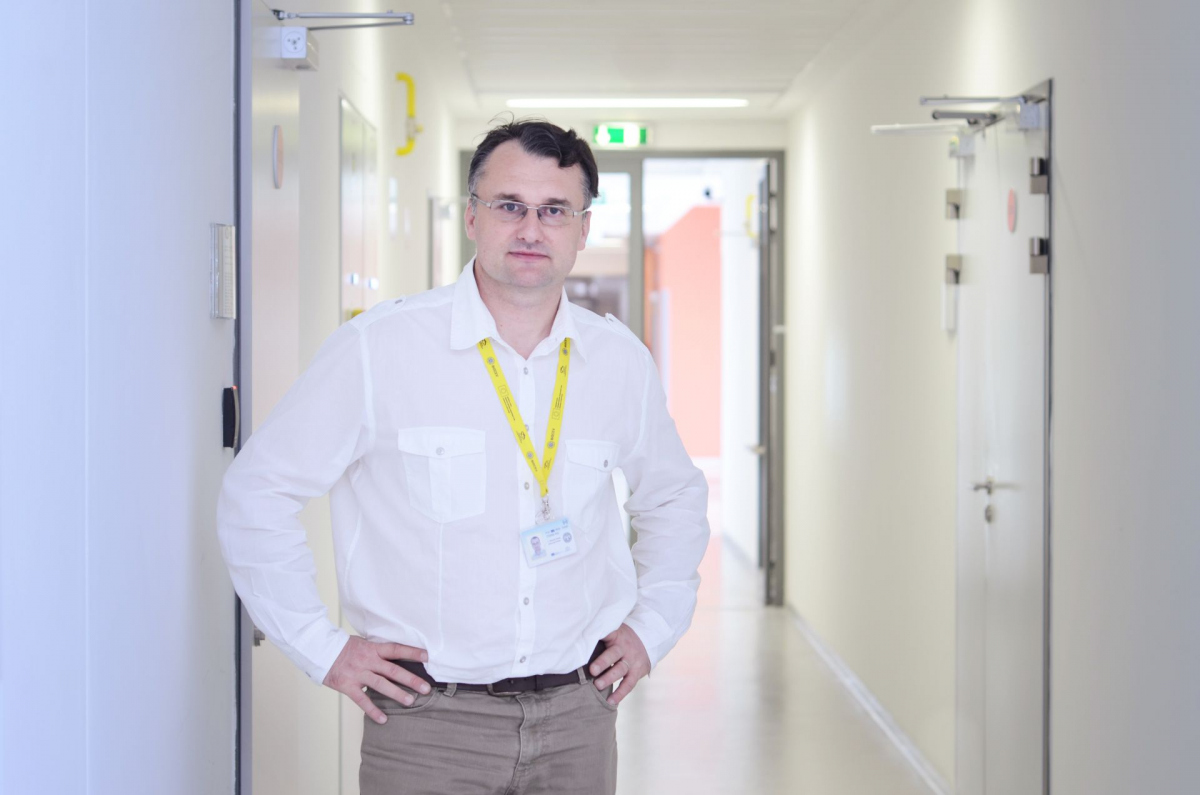 The laboratory of Professor Tomáš Stopka generates unique mice models that bear different mutations capable of reprogramming the gene expression of cells and help researchers understand how hematopoietic cancer and hematopoietic disorders develop. These unique mice models enable the monitoring of fundamental changes to hemopoiesis from the disease’s onset to its terminal stages. They also enable the testing of different therapeutic procedures that may slow down the process of disease development.

For more information about the publication: https://www.ncbi.nlm.nih.gov/pubmed/31068388

The BIOCEV Centre is a joint project of two faculties of Charles University (the First Faculty of Medicine and the Faculty of Science) and six institutes of the Academy of Sciences of the Czech Republic. Today, approximately 450 researchers and technical staff members work in the Biotechnology and Biomedicine Centre in Vestec. Almost one-third of them are foreigners. Their joint objective is to learn details about organisms at the molecular level that will be used in applied research and in the development of new therapeutic procedures.

One of the 53 laboratories based in BIOCEV is StopkaLab headed by Prof. Tomáš Stopka. It unites experts of different specializations: biologists, mathematicians, biochemists, and physicians. It specializes in basic research into hematologic malignancies with a focus on genetics and epigenetics. The above success of a research project implemented by employees of BIOCEV and 1 FM CU was possible thanks to grant agencies (namely the Grant Agency of the Czech Republic and the Czech Health Research Council) and Charles University under the UNCE project.

The Czech Center for Phenogenomics (CCP) is one of the six BIOCEV´s research infrastructures, large national infrastructure of the Institute of Molecular Genetics CAS and the largest facility of its kind in Central Europe. CCP will also work as a transgenic laboratory producing specialised, genetically modified mice that are used as tools for the research of gene functions by both the Czech and international scientific communities. Together with foreign co-workers, Radislav Sedláček, the Head of the CCP, and his team are working in the international programme entitled the Encyclopaedia of Mammalian Gene Functions, which is focused on the primary description of functions of all genes over the next ten years. The results of their research may positively affect the treatment of serious illnesses.

About the First Faculty of Medicine, Charles University

The Frist Faculty of Medicine, Charles University, with more than 4,500 students, is the largest Czech medical school. Its basic study programmes include general medicine and stomatology. Besides those, the faculty offers other specialized medical branches, specializations, life-long learning, and a number of doctoral programmes. Every year, more than 300 new physicians graduate from the First Faculty of Medicine, Charles University.

The First Faculty of Medicine also participates in the BIOCEV project – a European biotechnology and biomedicine research centre of excellence – and the Albertov Campus project, focused on the development of excellent research and learning activities at Charles University in the field of science and medicine.